Managing a cricket square and looking after an allotment can be a challenge at times, but the allotment doesn't look too bad at this stage although I have been chasing my tail at times. The butternut squash and a few more more leeks are still to go in but the first early potatoes are about to be lifted and the early carrots are almost there. 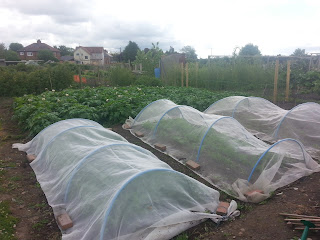 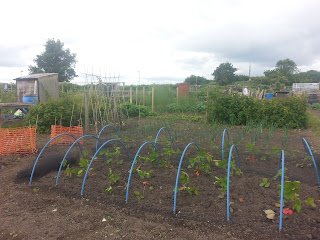 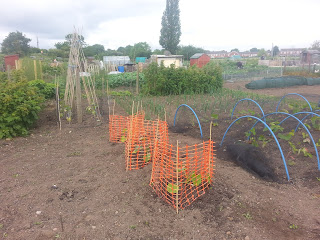 My request for help with getting some sawdust fell on deaf ears so I ordered some off the internet. A bale of sawdust arrived swiftly which was just as well as it was needed yesterday. 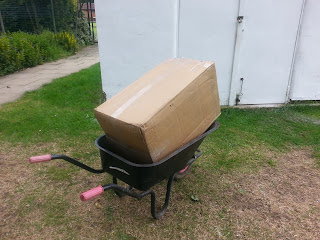 After the successful trial of the water pump last week, the club is now the proud owner of a 1" petrol water pump, which should do the job a lot quicker.

The rain before and during the home game yesterday left the pitch and square in a bit of a mess, but thankfully it was all superficial. 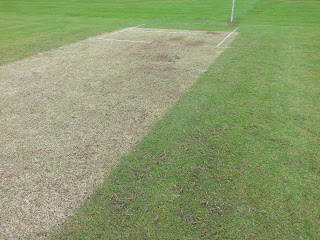 After a brush-up and cut this afternoon it looks a lot better.

The square is also beginning to look a little tired so with some rain forecast I also put on an application of some fertilizer to boost the growth and make it look a little more green.

Umpiring yesterday was an interesting experience. I always thought that the two umpires would work as a team, quietly talking to one another out of hearing of the players, helping one another make the right decisions. Yesterday, I was shouted at by my 'colleague' whilst still at square leg, telling me in no uncertain terms that I could not allow a run as the batsman had not played a shot. I am always happy to take advice when umpiring but when it is given in an appropriate way. It was a pity that he did not take my advice when I was trying to quietly attract his attention that a delivery was above the waist!

The next 3 weeks will see my attention turn away from being a groundsman to volunteering at the York Community production of In Fog and falling Snow at the NRM.


As George Hudson sets forth on his journey to build the great East Coast rail network at any cost, the people who build it, along with investors and passengers are caught up in the reckless extravagance of his great adventure.  The cost is high for all involved.  As they place their bets on the future and the wheel of fortune rolls from the station towards the dark night, only the driver’s daughter sees the danger ahead.
Told by a cast of over 200, audiences will move through the National Railway Museum’s collections and end up in a new purpose built theatre.

This is something that will be unique and probably never repeated. It is on for 14 nights, with 500 tickets per night and they are almost sold out. Do consider coming and watching it. You will not be disappointed.
Newer Post Older Post Home